It's a Frog's Life

I went out into the garden today to check out the pond on a whim. I know very little about pond maintenance, other than that ice and choking blanket weed is generally not good for pond life. Both have been a factor in recent days, the blanket weed being the more persistent problem.

Having spent two whole days in bed I felt blessed with a little energy, and couldn't resist the urge to grab a rake and poke about a bit. Soon I was gingerly extracting both blanket weed and silty and very smelly leaf matter from the bottom of the pond.

Nothing, but nothing, could be alive in this quagmire I thought rather bleakly to myself. I felt a wave of disappointment, remembering the tiny froglets that hopped about (with Ralph our cat hopping about after them) last summer in all that rain.

Then, suddenly, a head appeared. Then another, and another.
Stirring up the sediment clearly hadn't agreed with these rapidly appearing creatures of the deep and I quickly realised they needed some help. Fortunately my son arrived back from his Dad's just as I started flapping. He grabbed a bucket, we washed it out and had soon created a safe haven for no less than five adult frogs whilst the pond settled after being cleaned. 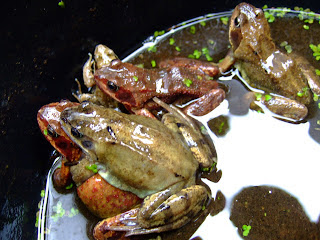 And two of them were mating! 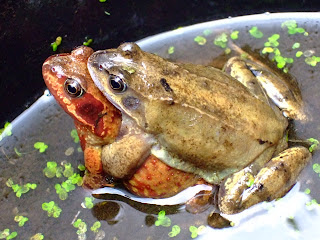 I feel it's a little unfortunate my whim coincided with their breeding (which I read later happens over only one or two days a year) and I do hope my efforts to 'help' haven't done any harm. But I confess it was really thrilling for my son and I to witness a pair of frogs in a firm embrace (the male didn't let go the whole time, even as they hopped in unison trying to escape the bucket). The females in the photos are bright red and I have learned that this is their 'in season' colour before they return to plain old green. Well, wearing red always worked for me so why not frogs?

These two were clearly attracted to each other... 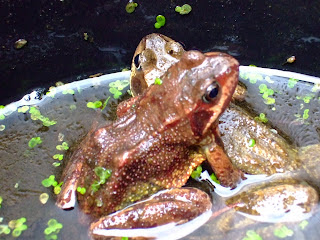 But just couldn't get it on... 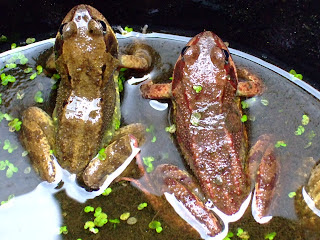 Though I have to say, would you be feeling particularly amorous under the glare of a lens in a garden bucket? Takes all sorts. My snapping away certainly did nothing to stop our more amorous pair inviting a third to the party... 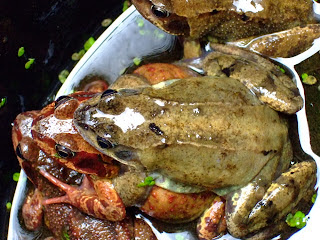 This totally unexpected encounter with nature has left me enthused once more about getting our garden sorted. I have a renewed determination to somehow get hold of some wood for raised vegetable beds and enlist some help in creating a proper wildlife pond. That means the existing one (which is small and rather badly positioned) can be the nursery pond to the larger one.

New project? You bet. And to think, I was reading about creating an outdoor aquarium to photograph your pond wildlife only yesterday. It's perfectly okay to gently transfer specimens such as frogs, newts and pondskaters into a tank for half an hour whilst you whip out your camera. How do you think David Attenborough and team got all those marvellous underground and underwater shots? A lot of trickery was involved that's for sure. Sometimes living in the city gets me down, and yesterday I didn't actually believe anything was thriving in our garden. But I was so wrong.

Back in the pond, it was business as usual. 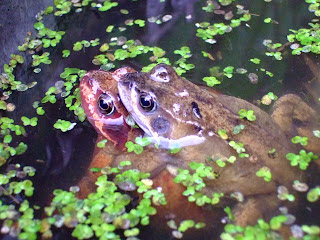 Oh you lucky lucky person to have a frog pond! :-) I am overcome with envy... Just think of the slugs they'll eat up! :-)

We're toying with the idea of trying to find a bungalow with a bit of garden to grow veggies, but I think we might well try and make a pond if it happens.

Stage one is having a look at what's on offer over a few evenings - at least doing the drive-by. And meanwhile getting rid of practically everything in the house. Declutter declutter declutter! It'll take me years I expect.

We have a sort of pond my son made -- half an oak barrel with some water plants and two goldfish but the chap next door has a great pond and his frogs often pop over. They're so lovely.

Not surprised the gentleman frog was clinging on for dear life. Wouldn't you if you only got to 'cling' once a year ? ;-)

Maggie, yes I do feel lucky now. It's ever so much cleaner and I'm looking forward to the gloopy frogspawn soon.
Do go for a pond if you can. I read wildlife mags and they say a pond is the best thing for attracting wildlife. As long as it gets a bit of sun (total shade is a no no) things will thrive.

Cusp: I love frogs and yes the whole thing was so very exciting. The male was certainly determined not to have his annual treat interrupted. Perhaps his mate was so red because she couldn't breathe.