It's nearly upon me. A whole ten months have gone by and I will in a matter of days be free of benzodiazepines.

Before I harp on I know there may be some people reading who use or have used these drugs, and sometimes for good reason. In fact there are often sound reasons why people turn to prescription medication. But in my own experience the damage far outweighed any benefit there could have been. For a start I have a liver condition that makes metabolising drugs difficult. In itself it is harmless jaundice, but put my liver under strain and the jaundice can become a bit more serious. I also have a neurological condition that is not necessarily helped by bucket loads of psychiatric medication. And they were forced on me rather than taken willingly. I'll stop short of denouncing benzos as pure evil, but they have certainly represented that in my life.

Back in January I decided it was time to be less drugged. To achieve my long term goal (my whole withdrawal programme spans three years - still three other drugs to go) I initially needed an increased dose of Valium to wean myself off the sleeping pill Zopiclone. This was achieved in a few weeks, and then the long Valium taper began. I descended into a persistent brain fog and my functioning became extremely basic. My outlook also became markedly myopic. I am too ashamed to link to my contribution to BADD this year, but it was me going on about myself in a way that had very little to do with Disablism or Blogging Against it. It was the drugs so I can only express regret and hope to do better next year ;-)

I didn't even know I'd become so introspective until I really started to emerge from it. In recent weeks I've been blessed with a rebirth of my senses. It started with colours over the summer. Then I started to enjoy cooking again, and savoured aromas and flavours in a way that brought back memories of four years ago. Being on Valium, in my case, has been like being buried alive. So coming to life again has been a revelation and a really unique experience. After my senses words started to return, then feelings. And for a while that was very hard, as I had a lot of feelings coming at me at once.

I had a rough time with each reduction in medication on my taper. I reduced at a rate of 1mg a month and suffered IBS, stomach cramps, muscle spasms, hypomania and sensory disturbance with each cut. I've also been through rage, paranoia and intense misery. The Samaritans came in handy a few times. I'm currently at 0.5mg and am soon cutting to 0.25mg. As I said, it'll be a matter of days and I'll be free.

And here's where the benzo rant comes in. It is indeed a freeing, a release from a purgatory I would not wish on my worst enemy. My heart sings with every new feeling of contentment, happiness, joy even, that comes my way. In many ways I still have many restrictions in my life, but somehow knowing that they are not down to being under a chemical soup, I accept them more readily and with less hopelessness. I still use a mobility scooter, cannot work, read at length, watch TV or films much, and still find listening to music tiring and confusing. So my CNS is still jangled, to say the least. I still need a minimum three rests a day. And I don't expect a miraculous cure at the end of all this.

But what is important to me is recovering my Self. Pretentious? Possibly, but when you have actually had your essence removed by the very people who are supposed to be 'caring' for you, when you realise that you are far better off without input from mental health services, when you go through emotions like betrayal, anger, grief and disbelief, the Self returning is a triumph.

To recover one's Self when it has been so abused as to have felt like little more than a bloodied, maimed corpse is freedom indeed. The internalised sobbing, sometimes screaming, that punctuated my days has at last receded. I have been held hostage, so to be free is to feel joy and to know that more joy is coming to my life.
Posted by seahorse at 00:01 10 comments:

Well it's been manic since the fire. And mania is my least favourite state. Fuelled by shock, benzo withdrawal and lack of sleep, I have found myself engaged in compulsions that must be broken.

Like weighing every single item from my Grandmother's house clearance that has been demanded by She Who Hath No Name and Lives Abroad. In a bid to get on top of the situation I went a bit OTT on the postage research and could now, feasibly, work for the Post Office offering a consultancy service on volumetric weight calculations.

It had to stop. So it has stopped. Thank God. Only to be replaced by manic research into moving my Gran's savings. Though in the current climate I feel I am not alone in tearing my hair out and wondering what to do for the best.

And, as if sensing with that finely-tuned sixth sense of hers that I was all at sea, cusp sent me a lovely present in the post that has soothed, relaxed and reassured. Thank you cusp, you are a love. And I smell gorgeous for once.

So at last, I have calmed down. A bit. And I am seriously ready for some quiet time. The decorator who will be repainting the bathroom asked me yesterday why I don't just move into my Gran's house, as I was moaning we hadn't let it yet. Ha, ha aha ha ha (and thrice ha, ha aha ha ha). Like I really want to be that enmeshed in family? And like I can afford the rent I'm charging? Anyway, we got a tenant today.

Here's a picture of a strawberry tartlet to celebrate. 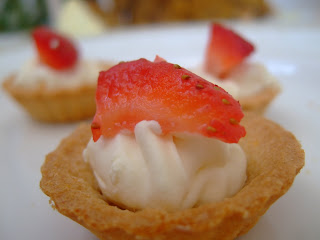 Well, someone somewhere has a sense of humour because having moaned about being cold we had a house fire on Sunday night.

My son was getting ready for his customary bath when a tealight caught the shower curtain and within seconds we had a raging inferno (well, okay, a not insignificant fire). So what do you do? Ignoring all advice I hurtled into the bathroom, grabbed a basket and bailed some of the bathwater in the general direction of the flames. Then we legged it, choking on toxic smoke.

The fire brigade arrived within three minutes and put the remains of the fire out. We were given oxygen in the fire engine for smoke inhalation. Hospital proved unnecessary because we only had a lungful or so each. Enough to cause a nasty cough, but not enough to do any lasting damage.

After an hour of general mayhem we were allowed back inside. The bathroom is a bit blackened but will be okay with a lick of paint. The shower has been obliterated as the curtain fell on it and sort of enveloped it in molten plastic.

Having said goodbye to the firemen (who fitted new smoke alarms for us and gave us some general safety tips...like be careful with candles) my son asked:

"Can we play Cluedo now?"

So we did. And the very next morning he went off for a week long trip with school. A bit fazed but ok I think as I haven't had a call and I did put the centre he's staying at in the picture. He's probably glad it's an outdoor sort of week.

An electrician from the letting agency is currently checking over the electrics, as it was lack of lighting upstairs that caused us to be using candles in the first place. He looks like Devendra Banhart. Which is nice. He's got to come back tomorrow to fix the wiring. Every cloud...
Posted by seahorse at 15:20 9 comments:

So my plan to not have the heating on until November has fallen at the first hurdle. It's cold. I am ill. I need to be warm. So on goes the heating. Damn.

It really pisses me off that you have to be elderly in this country to get help with heating bills that's actually worth having. A winter fuel payment, a social tariff that's guaranteed to pay...yes I know it's still a drop in the ocean for many, but some of us are without help altogether. When I enquired recently with my provider Npower I sailed through the checks. I was so happy and warm inside I was ready to share the good news at Ouch! Then they told me two weeks later that because I was on a dual fuel online tariff I wasn't eligible for a social tariff. Whaaaaat????

So I am back to square one. Saving £100 over 24 months is not the same as getting £250 a year knocked off your bill to help with winter fuel costs.

I left Scottish Power because they failed to inform me that they had introduced a social tariff back in February this year. I am still paying off the winter bill from last year, plus over £100 a month with Npower.

Whilst I await a resolution to my case, which has to involve something more practical than taking two showers and two baths a day to keep warm (when you get into bed after a shower or bath you stay warm longer...but of course you are heating water, which costs money) I thought I'd amuse myself with some top tips.

So here are my Top Tips for Not Dying of Cold This Winter:

Now this last suggestion isn't as mad as it sounds. Birmingham is home to the Number 11 bus route, which fortuitously passes through my area. It actually passes through, or around in a circular fashion, most of Birmingham so that's no surprise. The Number 11 bus route is officially the longest bus journey in Europe, at 27 miles and three hours. Crikey, that means the bus only travels at an average 9 miles an hour. And it is a local in-joke that pensioners ride it all winter to stay warm.

Only now the joke's on me. How I wish I hadn't chuckled all those years ago. Being cold isn't funny. No matter how old you are. And once you are in possession of a free bus pass, it becomes quite tempting. So, I've decided I'll take a thermos and my camera and join them one day next week and report back here when I've done it. Oh boy, I can't wait. Three hours of fun, fun, fun. But hey, at least my fingers won't be dropping off.
Posted by seahorse at 20:07 13 comments: