The last few nights have been somewhat disturbed around here.
Both my son and I have been terrified out of our wits by sudden noises. Screeching. Wailing. Bumps. Thuds.
Ralph, until this week our benign and regal feline, is at war.
It comes out of nowhere, a sudden almighty caterwauling that has both of us shaking under the covers. It can go on for quite some time and I find the noise so distressing that it has actually given me nightmares. I am such a big wuss. But it's as spine-chilling in the dead of night as the call of a fox or a clap of thunder.
Last night was really bad. My son came into bed with me and we cowered in the darkness as all hell let loose, seemingly all over the house.
Rather than keep his disputes outside it would seem Ralph has brought his turf wars inside.
Well, to be more accurate, we are being invaded. The cat who is choosing to assert its presence in Ralph's territory is slinking through the catflap and probably gobbling a hasty stolen mouthful of cat biscuits before being caught out by an enraged, towering tiger of a silver tabby.
Now, don't get me wrong. I think it's good that Ralph has finally settled into our new home enough to want to defend it.
It's been nearly three months since we moved. Each of us is facing very different challenges along the way.
My son is adapting to the separation of his parents, and adapting very well.
I am adapting to life as a single disabled mother, my body is complaining and sometimes I feel very overwhelmed. I am told I am adapting very well.
Ralph, after an initial period of stress is, it would seem, finding his feet and now taking on his first neighbourhood adversary.
But we do need less chaotic nights.
My son has a cunning plan.
He will now be sleeping with a water pistol by his bed.
When battle commences, he will creep up on the warring parties and squirt the intruder. Or Ralph. Or both. It won't be possible to switch on a light as this will ruin any chance of success. To be honest if Ralph cops it I won't be entirely displeased. Sympathy is at an all-time low as we reach nearly a week of disturbed sleep. Sleep is something I prize, and it is something a growing boy needs.
At times I do wish this didn't have to go on in the small hours and that they would take their disagreements outside where at least you get a chance to lob a boot into the night.
By day, Ralph returns to his benign, regal self. Plus he sleeps a lot. 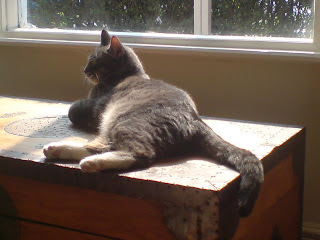 I spend the morning calming my shattered nerves with camomile tea and my son goes to school with ever-increasing dark circles beneath his eyes.
So tonight, a stake out. My son with his water pistol. Me? If I get there in time I will try and get a photo. In the dark, of two fighting, spitting furballs, whilst dosed up on painkillers and other motley meds. Chances of success? My money's on the water pistol. And my son will be rewarded handsomely.
Of course, we could just lock the catflap. But where's the fun in that?

Ah, right, yes. And there I was about to query why you hadn't considered locking the cat flap at night.

How foolish of me.

That would not be "fun".

Well, you see, we like a challenge round here. Of course it would be easier to lock the catflap. But then Ralph licks my son's face on and off in the night, because he loves him so much. Which also keeps my son awake. So we opted to leave the catflap open and take on the intruder. Which in a life somewhat lacking in thrills and spills seemed exciting if a little daft I agree. But in the end it rained all night last night and so no cats ventured forth and we all slept like tops. What an anticlimax.