You Are My Sunshine...

This has had me sufficiently baffled twice now. Baffled enough to post here and ask:

"Why, why has Homebase got 36 barbeques currently on offer?"

I mean, come on. A cheap one, a mid-price one and one, just one, of those very silly ones I can understand. Maybe even two of the cheaper ones, but 36? What has led a DIY store to believe that people need this amount of choice, especially after last summer! The number, incidentally, comes from their television advertisement not the link, which is in fact a helpful buying guide for those venturing into unchartered barbeque territory.

What's fuelling this excessive consumption? It all smacks of Nano skins to me. No good to own something a bit cool these days, oh no. It has to be cool, and original. Want a barbeque? What colour? What size? What shape? Gas? Electric? Charcoal? Retro? Traditional? Big? Small? Where will it all end? Well, as with Nanos, with people all crowded round one murmering "Nice." And feeling nothing but empty and futile envy. But the drive for an almost solipsistic individualism pushes on. Not so much about Keeping Up With The Joneses these days as Stuff The Joneses Look At What I've Got.

Let me share a secret with you. Barbeques are not cool. Fires are cool. We had one last week and melted a camping saucepan full of chocolate by balancing it precariously on a plank. Then when the plank caught fire we somehow retrieved the saucepan from the middle of the embers and dipped strawberries into deliciously runny gooey sauce. Made entirely of chocolate buttons. And fire.

And please don't tell me about my carbon footprint. We had enough sooty ones all the way up the stairs to bed to remind me about that. It was a great gathering of like-minded pyros though. My son loves telling his friends "We're having a fire." And so do I. It has a certain frisson these days that "We're having a barbeque!" just doesn't somehow. And I don't think kids look quite as sparky-eyed after a barbeque as they do after a Boy Scouting meets Lord of the Flies escapade in my back garden. Yes, it can be quite anarchic. And we get to be very messy indeed. 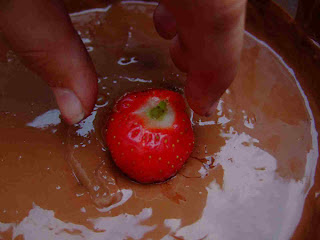