We seem to spend a lot of time, as people with disabilities, fighting.

Fighting can be tiring, energy-sapping. But it can also be invigorating, life-affirming. Not fighting is invariably depressing, because it usually indicates that we have given up. I’ve yet to meet a person with a disability who hasn’t had to fight for something.

We have to fight for things we need, fight prejudice, fight for equality, for recognition, fight family and friends even. Is it so terrible, all this fighting? Some relatives were just made for fighting with after all...

Or is fighting a worthwhile, inspirational even, pastime? I once met a community of artists in Berlin when travelling with a boyfriend just after the Wall came down. We found a squat and although it was achingly hip, there was a decided air of aimlessness about the place. One of the artists revealed, through a haze of joss sticks and other smoke: “Before, we had something to fight, to react against, it was what drove us. But now...”

It's not that the Wall coming down was a bad thing. Of course not. It's just that at that time, and for a good while afterwards I suspect, these artists were in a kind of creative limbo. I’m sure they went on to find new inspiration, new fights to be had, but thinking of them now I wonder how they view ‘the bad old days’.

For us, the one in seven, the bad old days are still very current and it’ll perhaps take something similarly seismic to produce the shift in understanding of disability that we all crave. Only we don’t have an icon of oppression to galvanise us. Our Wall is invisible. We push against it. Sometimes it gives a little. But then it gets patched up with more bureaucracy and more prejudice.

Here’s some rubble at the top of my road: 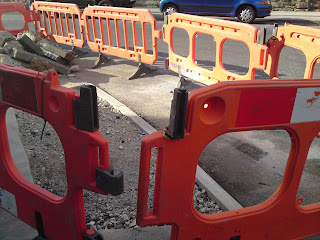 Nothing remarkable in that you might say. But to me? Well, I’ve half a mind to start bagging it up and selling chunks of it, because it represents a small, but important, victory.

A year ago I wrote to my local council asking them to sort out all manner of issues in my neighbourhood to do with the simple act of Getting Around.

Not so simple, you see, when you have pavement like the surface of the moon to navigate on the way home from school. Or a crossroads so dangerous that your son has to literally stick his neck out into the traffic to see you safely across on your mobility scooter. Then there’s the small, but not insignificant, matter of reaching your own front door.

And this is where the rubble comes in. Until Monday (oh happy coincidence for BADD posting!) I had to take a long and perilous route home, crossing yet more dangerous junctions. Just to reach my front door. A ‘friend’ (make that mother of one of the kids my son goes to school with) once stopped me on my way back home and said: “ Where are you going? I thought you lived that way.” To which I replied, “ I do, but there are no drop kerbs.” She looked at me, looked at my scooter, muttered something about a petition and of course, I heard nothing more about it. 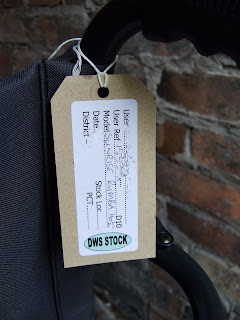 Finally. My NHS wheelchair. It arrived after a three year wait, and the intervention of my MP, a solicitor, then a barrister and finally an impending Judicial Review. Threaten a JR, and it’s amazing what happens. They didn’t want me setting a legal precedent you see. We can’t have everyone locally demonstrating they have a legitimate need for a wheelchair, can we? Though the beauty of this oh so sweet victory is that yes, actually, they can. And they will. And the narrow and hopelessly nonsensical selection criteria which initially blocked me altogether from qualifying for an NHS wheelchair has now got to be changed. Because in the end, I did qualify.

Anyway, not wanting to damage my shiny new power chair, all the more precious for being three years in the waiting, I wrote to my MP. For about the millionth time.

Great chair, thanks, but please help me get my pavements fixed, can’t get about very well, etc etc.

And, gawd bless her no matter how many homes she has, she wrote immediately to Highways. And then, incredibly, Monday happened.

Drop kerbs. To go with my recently achieved H marks at the aforementioned nightmare crossroads: (H marks stop dangerous parking). Now all I need is the pavement resurfacing. Then I’ll be able to get about without excessive and unnecessary restrictions on my movements.

After many years of fighting for disability benefits, for alterations in my home, for basic equipment, for the right to use it unimpeded, I’m almost at the point of not having to fight.

There is, of course, the conscious decision not to fight. Which sounds all very Zen and tranquil, but to me also somewhat tranquillised. I’m a big fan of meditation, don’t get me wrong. In fact without meditation I’m sure my internal generator would have blown a gasket years ago. And there are people out there who seem to live without fighting. But I sometimes wonder what drives them. Peace? Surely not. In any case, it's not for me.

Have you ever had someone fight your corner, rage on your behalf when perhaps you don't feel like raging yourself? That feels good. And then, when you do recover some fight nothing, surely, nothing is so life-affirming as fighting for someone else, fighting for the truth.

Love and friendship and all that fluffy stuff is all very well, but today (if not every day) I say "Spread a little indignation."
Posted by seahorse at 01:38

Totally will spread some indignation today. Thanks for your post and congratulations on your new improved mobility that you fought so hard for.

Thank you. I am disabled and so is my son and sometimes I get tired of fighting. But this reminds me that there is a reason. Seriously, THANK you.

Great post! I live on a busy corner and the city came out, many years ago, to gring down the sidewalks for accessibility.

I tried them when they were done and they weren't flush with the street. I called the city and said I was in a wheelchair and not totally happy with the outcome. 3 people came out and I showed them the problem. They said to chose the 2 corners I use the most and they'd fix it.

They supposedly didn't have the money to do all 4 corners but if they'd done it right the 1st time, they would have. But it pays to speak up.

Congratulations on the wheelchair!

I love that quote! And I love your spunk too!

WC - thanks. I've fought for a lot of things, thinking about it. So fighting is nothing new.

Haddayr: Me too. It is tiring. But having someone help you fight is great.

JJ: It certainly does. Even if you have to speak up more than once.

Starrlife: It's kind of my raison d'etre. Which may, or may not, be a good thing...

Congratulations on the new wheelchair and the new mobility around your neighborhood. Sometimes it can be exhausting to fight, but the outcomes can be wonderful.

FW: So true. Worth it in the end usually I find. Thanks for the congrats. It has been a celebratory sort of week.

I do think that fighting is worthwhile, but I also think that not fighting, or backing away from the fight is just as vital. (For me, at least). There are sometimes when I just have to say: I will save my battle for another day. And then, when those days come, I'm armed and ready to go.

Hooray for you, and fighting for what you need!

Like it or not I think my fighting will never end. I always wish someone else would do it for me or even join me, but that rarely happens. AS I grow older, it becomes harder and I become angry at others---where are they? Great post. Too bad YOU are not next door to me!

What a post! This is a great story and example of why we fight.

nte: I do have time off sometimes. But generally, and especially these days, I am a towering rage inferno. Or towering inferno of rage. Or something.

Diane: Maybe we should ask a reality show maker to house loads of angry people on Angry Street. I'd watch it.

A super MLA and a great job and probably the first time I have heard of letter writing from a single person working - thank you for encouraging me to not give up and to write on, to my own MLA.

Hi,
My MP is particularly good, which helps. But I'm also wondering if an impending local election had anything to do with it. Sometimes I feel I don't have a voice any more, but I think this shows I do.

"Not fighting is invariably depressing, because it usually indicates that we have given up. "

Your wonderful post could've stopped right there, and I still would've said that it totally encapsulates the chronically ill/disabled experience.

Thanks for your wonderful story of wheelchair triumph - I'm so glad you got your chair - and for the reminder that fighting isn't really an option. It's an oppertunity to center ourselves, and assert ourselves, amongst the chaos that we can't control. Very, very cool.

I have a comic about my daily fights - and occassional wins - in my life with chronic illness and i'd love for you to check it out. its http://acomiclifeindeed.wordpress.com

Thanks Miss Waxie. I'll definitely be over at yours sometime soon :-)