I'll be honest and admit that what I needed was something far more soulful, more engaging and rewarding. And because I don't leave the house much, I looked to my garden to provide. And this is the strange thing...why the garden? I was never into gardening before I became ill, so why now, especially now that I can't physically do anything?

I don't know. Well, perhaps I do. I think it has a lot to do with spaces. Having my own space after so many years of being stifled. Needing a space to escape the overwhelming pressure in my life. Not knowing how to acheive this, but wanting desperately to find out.

Doing up a garden when you can't lift a watering can is a challenge. It requires above all patience during the many long delays that occur when funds dry up and your health fluctuates. I can only afford to get my tattooed gardener in for heavy work about twice a year, after saving furiously. It is incredibly important to me that my son and I have a pleasant environment in a really very unpleasant neck of the woods. Yes we can hear vandals and car theives from our house, but as long as what I look at out of the window is beautiful, I can cope better.

So. Phase One was to cut the hedges down from 12 foot to about nine (across as well as high it seemed) back in May 2007 and spend the best part of a year doing nothing else, though my son did plant a herb wheel. I was recovering from my relationship breaking down and had a pretty bad relapse with my health. We got out and about looking at other gardens, but largely I saved up some money for Phase Two.

We hired a man with a mini digger for £100 and had the whole garden rotivated. It was the only way. It was choked with brambles and terrible overgrown old shrubs. Then everything stopped again for months. I saved up again and spent many hours dreaming of how I wanted the garden to be, and then we were able to put in Phase Three:

A shed and some decking. Yes, yes I know. Decking is passe. Common. Horrid. But it's also great if you can't move about much. It suppresses weeds and gives you a cheap and instant sun trap (if you do your homework and work out where the sun lies in the late afternoon). 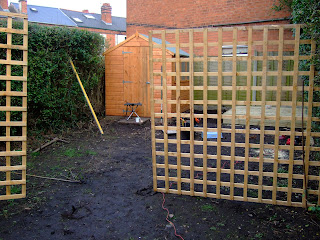 Aaagh, it looks ghastly in this picture! And if I'd stopped here, I'd have committed a terrible crime all of my own. But that's the stage we were at for quite a while. We're now into last summer. There were no plants to look at, other than what we'd grown in handbags and filing cabinets. And no path. But we sat in the sun and I formulated Phase Four.

A path. A pond. Some paint. Raised beds. And this is where things really take off. Once the path was laid and the trellis painted and the hole dug, my graph paper design started to take on a reality.
Posted by seahorse at 01:10

Just found your lovely blog. Much I can relate to. I haven't found any description of your particular situation. Can you point me to it if it's here?

Blessings on your new found mobility.