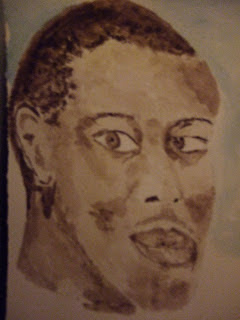 It's not exactly worthy of the new Saatchi Showdown site, but here is a watercolour of writer and poet Helon Habila I did at art class today. It doesn't look much like him and unfortunately he wasn't there in person (had he been I wouldn't have been painting but asking him all about his writing, his views on Nigerian narratives, whether he likes comparisons with Ben Okri, and whether he is single) but it doesn't matter. I will be working on my drawing technique to lessen the squints and half grimaces that seem to characterise my work at present, but I'm just a beginner after all. Not as enigmatic as the Mona Lisa, but who cares about her anyway?
Looking at the Saatchi site, it's a bit OTT and over-hyped, and the premise is kind of X Factor for the art world, but nevertheless it does provide a platform for new artists. It went live on Monday and has had 35 million hits so far this week. Bit more than your average blog site. Basically you get to rate your fave work using pretty little stars, on a scale of 1 to 10. Voting starts in a couple of days.
My own artistic effort gave me a warm feeling of satisfaction not felt much of late. Plus it was a lovely sunny day and had I not used all my energy for the class I would have tried taking some photos. But everything in moderation. It's been one of those good days, where even a couple of sticks of celery delicately dipped in Bovril brought immense pleasure (try it, you'll either love it or hate it. I was out of Marmite, with apologies to Lady Bracknell's editor and temporary ghost of Marmite Boy).
Celery v a packet of crisps? Celery any day. Crisper than crisps, fresh from the fridge and with limitless scope for added flavour enhancement (Bovril, Marmite, peanut butter, coleslaw, humous, a sprinkling of salt to name but a few). Is it just me or is celery the business?
Then I cooked a rather nice bit of haddock with a baked breadcrumb topping, which had a mixed reception, but I COOKED something, from scratch. And I painted someone I admire. A happy day.
Posted by seahorse at 17:46