Good things happened today. My son was taken out for the day with a mate from school. They went skateboarding and he perfected an Olly. No, I'm not sure what it means, but it's like totally rad. And if you can't do an Olly, well, just get bent.
My oldest friend came over for a cuppa, and we went for a drive for a change of scene. This really helped take my mind off being in pain, and car seats just seem to be designed in the right way for my body sometimes. Other times they seem anything but, but there you go.
On our travels I saw a pheasant. Very close up, but not close enough to whip out the camera. Anyway, sometimes you just have to be in the moment, and it really was a very beautiful, iridescent pheasant. Bit like this one, taken by fellow Midlander John Loach. 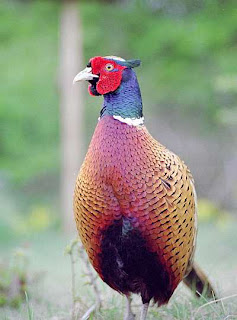 Meanwhile back at the house, a colleague came round to see my ex about some work stuff. He splurged on why there's a for sale sign up outside. In fact, from the sounds of it, he told her everything. She told him, for the first time, that she has M.S. and has done since 2001, and they had a long chat about illness, how people react, how individuals adjust, or struggle to, how society can reject you, and how couples are affected. Two different illnesses, so many parallels, one emerging outlook. She is much further along the line of acceptance, and has achieved a balanced and wise perspective. But she'll have been in places I've been at in order to arrive at where she is now.
And even through separation, I feel we will get there and take on board what has happened to us, work it all through and learn to live with it without so much angst. We still have a son together, and will arrive at a more peaceful way of living, hopefully soon. And it really helped him to talk to her. She's going to lend us a couple of books that really made a difference to her outlook. Once again, it has been a day where contact with some understanding types has made all the difference. Oh, and a close friend popped by with his daughter last night and was very gentle and kind to both of us. Visits can be a bit like buses sometimes. In fact I'm thinking of that Wendy Cope poem about men...

Bloody men are like bloody buses
You wait for about a year
And as soon as one approaches your stop
Two or three others appear.

Great poem, not quite appropriate, but visits can come in waves. Mustn't grumble though. Anyway I digress.
To round off the feelgood vibe of general support I randomly found this from Tokah a few minutes ago. I was just checking to see what the next Disability Carnival is about (Disability and Culture) and found a post about his experience and management of pain. It was enlightening in terms of how your true self can be twisted by the aggravation of a background hum (or scream at times) of pain.
And I didn't feel like blogging. I guess there's a time for taking to your bed, and a time for getting out of it again. But having been further than I thought I would go today, and in more ways than one, I'm going back to it now :-)
Posted by seahorse at 21:38

I wrote a song called 'too young to be blue', the first verse of which goes: Men are like buses, they never come along, they just pass by on the other side. When eventually you see the one you want it's out of service, broke down or going to take you for a ride, but I'm a bit too young to be blue.
Outings can be so great but sometimes when I go out I spend the whole time longing to be back in bed. When you feel comfortable to go out despite the pain it is so refreshing - especially if you're with kind people who accept a slower pace.