So glad to be back. Why I felt the need to be away so long I don't know. But then maybe that's the sign of a good rest. I certainly had that. No forms, no fights, no stress, nothing to worry about, all meals prepared. My mum is fab, even if she does keep giving me her Saga magazines to read and has no computer (aagh). But I got home last night, and it felt like home. It's been nearly six months since I moved. I can't believe it. I sang "Hey Mickey!" all round the kitchen. Because I can. Only why "Hey Mickey!" (the Toni Basil original)?
It's just so ludicrous but lots of fun:

So I came home...to Hey Mickey! and a fledgling blackbird. Ralph doesn't always eat his offerings, particularly if they can fly away, which this one made every effort to do.
I walked in and the first thing I set eyes on is a sea of feathers on the kitchen floor, all through to the hall in fact, and deposits of bird poo here and there. Great. But I thought it was dead, eaten, gone, digested, forgotten.
And worn out by singing in a quietly punky style I went to bed.
TWEET. 8am the next morning. I sit bolt upright. I am very noise sensitive and had only just removed my earplugs. After the relative quiet of my mum's I was bracing myself for a bit of traffic noise. TWEETTWEETTWEETTWEET. God, it was like an elephant trumpeting from the next room. Ralph lazily looks up... 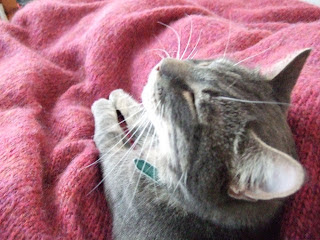 then rolls over and assumes the ridiculous posture he reserves for deep and relaxed sleep (legs in air, belly on full view). I think he'd spent a good few hours in between his last feed and my return trying to catch his prey, only to be outwitted at every turn. So he gave up. Leaving me at 9am groggy with my grabby stick, trying find the owner of such a very large tweet and coax it out through the back door.
9.30am My son returns from his Dad's, our joyful reunion somewhat curtailed by a TWEET from the kitchen. Aha.
With the aid of a waste paper basket, some cardboard and the grabby stick, we gently persuade our fluffy friend (no actual grabbing necessary, I hasten to add) into the basket and on to a branch in the back garden.
Ralph stays upstairs for the whole episode. Such wanton abdication of responsibility could not go unchecked.
I had also returned home to find him jumping and scratching in that way cats do when infested with fleas. So at 10am Ralph is given a thorough flea treatment. Oh how he hated it. Much growling and spitting and then out into the garden. By 10.30am I was ready to crawl back to bed, but a friend came over! Too much excitement.
Later this afternoon whilst building a huge stack of twigs that we may burn if we dare... we found our bird dead on the grass. Such is nature. Either Ralph finished it off in a sulk, or it just expired. Sad, but fledglings can so easily make the wrong move, such is their inexperience in life. Meanwhile Ralph is now sitting on my mouse waiting for me to eat my porridge so he can have some. Did I mention he is getting fat?
Tonight, after a happy and really quite varied day my son said:"It feels like I've been back for ages. It's like when we moved in. I actually feel like I've been here for years."
It's called home. And getting it right.
Posted by seahorse at 22:56

Here's one I like a lot - Video Killed The Radio Star. Off you go and sing it :-)

Isn't it ovely to find the right place to live ...such a relief and I'm sure your home-making skills have a lot to do with making your son feel so settled