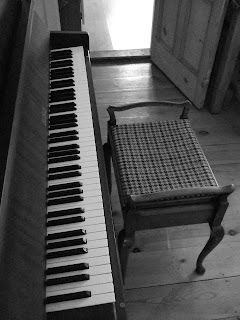 I am piano doodling. Just a few minutes here and there but there are ideas emerging. I just need some way of recording them, these doodles, because if I don't at least write them down they are lost within an hour or so. Can't find any manuscript because of the move and really I'd rather record as it's probably easier. I need to phone a friend. There is to my mind no way of connecting an upright piano to a computer. And even if there were, I would only trip over the wires. So how is it done? And can a decent sound quality be achieved? I know the piano needs tuning that's for sure. It's been neglected for so long, but now we are getting to know each other again. But mp3 files? Recording and transference of said files on to computing device?
Unfortunately ich do nat undyrstande the technolygie. Yes, I have just discovered that Geoffrey Chaucer Hath a Blog. He recently attended the gym, having been advised by his doctor to take up some form of exercise on account of high cholesterol and an expanding girth.

"So ich haue ben yiven up to sondry peynes and tormentes far more grevous than thos recorded in the helle of Dant - many grim machines that doon twisten myn limbes this wey and that, and bicycles the which travel no wher (ywis, hym Sisyphus wolde haue a conveyance swich as thes 'stationary bicycles' which labor the legges but move nat oon paas forward), and large men who clamor at me to "feele the burn." Ywis, ich wolde rather feele the burne of the flaymes of sathanas than feele the burn of the gym! "

I had to share this, it made me laugh so much. I came to it via a link from Bracknell Towers. Her Ladyship does have an extraordinarily diverse links list. Back in the mists of time I recall I was half asleep, hungover or not present for most of my Chaucer tutorials at university. They were scheduled at 9am, which was a tad unrealistic an hour for most of the group. But it was still my favourite area of study and had I done an M.A. Chaucer would have been the man. I am so glad to find he is blogyng. Those who wish to read The Canterbury Tales can do so here or may I recommend for those who need to recline with a book, The Riverside Chaucer.
Posted by seahorse at 19:22

You'll almost certainly have a microphone socket if your computer doesn't have an internal microphone. For audio 'note taking' as opposed to proper recording, you only need the simplest little mic. I had a quick butchers on Amazon to see just how cheap these things were and found one for 49p new!

That's all you need, I should think. If you want to record something to day, most tape-recorders have built-in mics you're not even aware of, but I should try the computer first, especially if it's a laptop.

Am very excited just now as our beloved piano is soon to return to us. It had to go and live with AJ's Dad because we couldn't fit it in the last two flats. A little anxious that we'll fit it in here, but still...

Thanks for that, will get experimenting. Just found this link too - http://pianoeducation.org/pnohdiar.html

V excited for you re piano. You must have been without it for a long time. When that happened to me my hands used to go to play a piano that wasn't there! Can't believe I nearly lent mine to a friend, similarly thinking it wouldn't fit here. I'm sure you'll find space, and it'll provide much joy.

heh heh--goldfish talking about fitting the piano in the flats--when it's flats that are in the piano!!

I love the Riverside Chaucer! I bought it for my birthday present several years ago.

Hmmmmm--rather a Gollum (from LotR, not Gollem from Jewish legend) connection: Riverside Chaucer as my Prescioussssssss, my birthday presssssennttt.

A piano ! Excellent. The best of mood restorers known to wo/man kind. My Bump knew she had achieved a milestone when she could at last remove hers from mine and install it in her very own place.

Geoffrey Chaucer is the best ... see my post 'Setten Free' (if you can be bothered) from 30 June 06 and my comments on his blog linked there. Boast boast.

Thanks Yorick and Sally. I'll check out those links when I have a window of concentration :-)

Wow Sally thanks! Both of those are v useful - manuscript online - genius (if only). And the vocalist stuff looks fun to try out. Thanks

Hello again. I have left a response to your comment on mine, re your current assessments, and their budgets. And a hug to you too !