Only two more days on antibiotics then back down to earth. Did cancel the new psychiatrist though. It would have been totally counterproductive for him to see me like this, all dozy and 'whatever' and compliant. Not me at all. My GP gave me a temporary prescription until I meet Mr Shiny Shoes next week. I just know he will have shiny shoes.
Instead, I have been occupied with largely sleeping and the following wholesome activity which got me some fresh air, the first for several days.

We have an abundance of rosehips at the top of the garden and I felt compelled to collect some before they go off. Wild food is great to forage for, even better with your son in tow so you can spout off about nature and living simply and using what's available right on your doorstep. Once you know what to do with it.

I do have one question that hasn't been answered in my google quest to find out how to cook them or what to use them for.
Are these ripe yet? 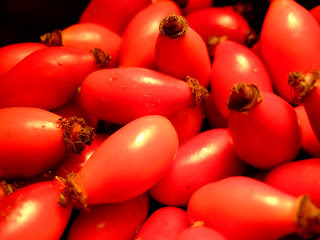 It's not my best shot, but it was late and I am still playing with indoor macro settings for my winter project. Anyway, a question for anyone with an affinity with nature or love of cooking...What colour are they supposed to be, and how soft, before you attempt to turn them into jelly or syrup or whatever? Do they need to be squishy? These are quite firm and bright red. They are currently residing in the freezer for a night to give them a 'frost' before cooking. That's what those in the know seem to do. And it has been interesting in my trawling of sites for recipes to pick up on climate change. This year's rosehips are early. We are unlikely to get the frost they need to sweeten them before the opportunity to harvest them passes, which is why people are using their freezers. But are the ones we collected even ripe? Will I poison the neighbourhood with my concoctions (jelly or syrup, possibly both if I can be bothered). Will I be alarmed at the equipment required to embark on such a project? I don't want to get into all that thermometer business. A kitchen is a kitchen, not a laboratory.

This has all come about because the gardener returned to do battle with the ginormous hedges that have sprouted forth in this exceptionally wet summer.
He pruned back the buddleia. It was huge, now less so, but takes up so much room for a postage stamp garden that I wonder whether to have it taken out - then I read the post where I took a picture of a bee - now I feel torn, though it only flowered for a week or so... 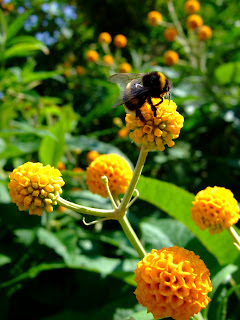 Once he got past the buddleia, he fearlessly grappled with the hawthorn, which flowered in May. It too had become gargantuan, unwieldy and quite fearsome. Once tamed, the rosehips came raining down. I will be planting cuttings from the original tree, which remains, though seriously pruned back. If we stay here long enough I'm aiming for a hawthorn hedge, or at least a couple more trees going along the whole back of the garden.
Rosehips are beautiful. Big, red shiny berries which glow in the autumn sunshine and, having done a bit of research, can be used in all manner of recipes. Rosehip syrup. Jelly. Puree, tea, wine.
So, having millions of the things littering the garden post pruning I thought it would be best to go out and pick them even if deciding what to do with them comes later. My son and I collected three large bowlfuls, and there are plenty more to come.

Hi. We made rosehip jelly once and it was time consuming though the result was very nice. Some recipes tell you to scoop out all the seedy insides so that you use the remians (skins) for the jelly. This is the time consuming and messy bit. You usually have to combine the hips with apples of some sort to bulk them out/add sweetness.

This is the best recipe we've tried:

*4lbs apples (windfalls will do. You can use crab apples too if you have any

Measure juice and match it by 1lb sugar per pint. Mix sugar and juice in pan and boil until setting point is reached (when a drop placed onto a saucer of cold water sits there without losing shape) Pot into warm jars.

I don't know about rosehips specifically, but in general if a fruit is red, it's ripe.

Better get my giant saucepan out then cusp, thanks. No thermometers though, promise?
As for deseeding, I've one more day of feeling pretty stoned tomorrow, so why not spend it getting lost in rosehip deseeding world?

S. It's weird, they look ripe but they're so hard. And other sites go on about squishiness and black tips. I guess I'll just cook mine up and see what happens. They look pretty though as they are. Shame you can't make lasting bead curtains out of them.

God I'm so out of it. Rosehip bead curtains.