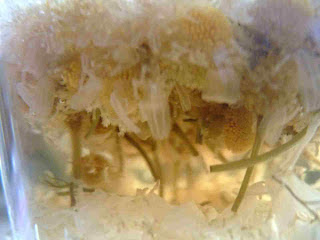 I discovered loose chamomile tea at a teashop last week. Whole flowers at £3 for 50g. Lovely taste but expensive. So I thought "I know, I'll grow my own."

This seemed like a great idea. I remember when I was very ill, a friend of mine had some Bulgarian friends to stay. They were shocked by my sickness and jaundice and when they all went off camping they spent a prickly hour handpicking me nettles, which are known to soothe irritated stomachs and improve digestion and liver function. How nice was that? I didn't know these girls (and they were girls, just 17 or 18) and yet they thought nothing of doing this lovely thing for me. In Bulgaria they regularly go out harvesting chamomile and nettles, borage and all manner of herbs for use at home.

Now, a bit of research has revealed that over an acre, a single worker harvests just over 1lb of chamomile flowers an hour. That's just ten 50 gram bags. Ten tiny bags an hour! Which then get packaged up and sell for £3 a piece. Slow, slow work, and hard work. Lots of bending down and the rules state flower heads only. Hmmm. I'm starting to wonder where my chamomile flowers are from. Croatia. Okay. Are they Fair Trade? It would appear not. How they are sourced? Who farms them? Who picks them? How much are they paid? Remember, whole flowers in any herbal tea are likely to have been hand-picked. So I go online and find after a long search that Fair Trade chamomile flowers do exist, but you have to ship them from the States. Fair Trade versus carbon footprint? Oh dear.

Now I really want to grow my own. But doing the maths and scaling down from an acre to little more than four square feet produces an amusing yield for the chamomile lawn I was planning in my back garden. Precisely 0.15 lb which is 2.4 oz, which is little more than 67 g. Which is not much considering purchase of plants and the time it would take me to rake the lawn for the flowers. And that's if any flowers grew at all. My garden can't compare to sun-drenched Croatia, or Egypt (another major source for chamomile flowers it would appear).

The Fair Trade versus carbon footprint dilemma is a tricky one. Shipping a bag of tiny daisy-like flowers halfway around the globe seems ridiculous. A bit like this post really, but hey, I felt it was worth checking out. So many things on my shopping list aren't Fair Trade. And I drink gallons of chamomile tea. So the guilt offsets any benefits gained from sipping the heady brew of whole flowers, that's for sure. It is lovely though. Sigh. If any UK farmer is reading this and has an acre to spare, let me know.

Maybe one day we'll have a 'Pick Your Own' situation much like strawberries. And that'll be because of global warming caused by all the planes carrying foodstuffs like organic Fair Trade chamomile flowers around the planet. Ironic or what?
Posted by seahorse at 18:06