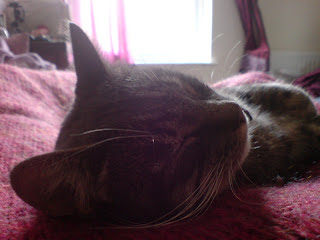 Something very beautiful has recently entered my life. Through the cat flap. All cat detesters look away now.
Ralph was knocking around two years ago when we first moved. He and our cat had a brief acquaintance until our cat disappeared. He was gone for three months, during which time my health worsened (not in direct relation to Oscar's departure but he didn't help). It was actually whilst in hospital that I discovered the new owners of Oscar had taken him into the vet and his chip revealed his true identity, thus enabling him to return home. Oh happy days, I wish. Oscar came down with a bladder infection, needed long, expensive treatment and died a year later. In fact his care probably cost more than the NHS eeks out on me.
Ralph has, similarly, done a ruuner, found us, moved in and boy do I feel guilty. He is beautiful, very quirky and skittish and quite happy. But not ours. We found the owners and contacted them. They were concerned about him but explained he had probably done it because they got a new kitten, and sometimes this upsets existing resident cats. After agreeing no feeding for a while, to try and get him to go home, Ralph was looking distinctly hungry. (They said better to feed him elsewhere than not at all when he's refusing to go home). He kept coming to see us regardless of food so we were given the go ahead to feed him. And he has been here ever since. Texted owners to say he's okay. No reply. Do we formally ask to adopt him? Go round? Or just let Ralph run the show? Cats eh?