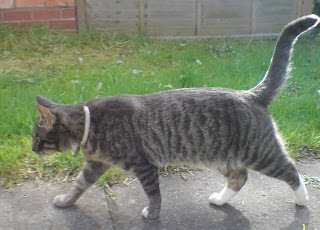 Ralph, bless him, caught a mouse this evening. This was not a pretty sight, and after much playing about and generally sadistic cat behaviour he was booted out, with mouse, into the rain. I don't know what became of the mouse, and I don't want to know.
But for those of you not yet familiar with Ralph (who shouldn't really be called Ralph on account of his superb looks, but he isn't mine yet as he has just kind of moved in from across the way so I can't rename him officially until they've completely given up on him...plus I'm moving soon too) here is a photo. I do love him so. Interlude over, please dispose of sick bags accordingly.

Aw! What a cutie! I love his white booties!

Isn't he? The mouse survived, so I hear.