Tonight was something of a triumph over tragedy. This is largely down to the bravery and sheer resilience of my son, who I introduce to you today through the magic of pancakes.
I asked him first if it was OK to feature him on my blog. "What's a blob?" he asked. I told him it's my website and I try and put good things on it.
This week saw an eight-year-old boy return to school with the world somewhat heavy on his shoulders. His parents have told him they are splitting up, and I won't go into the details here as it's a little too raw to write about, but I am so proud of how he is handling things.
Yes he looks pale and tired, and we arrived home from school to find the For Sale board up outside the house. There wasn't supposed to be a board, but oh well, everyone knows now and it's a bit late. Plus we really do need to sell this place. Anyway, I digress.
Tonight was all about Pancake Day, so we got on with the very serious art of trashing the kitchen with eggs, flour and 'the ones that got away'. This year there were at least three lumpen abstracts, rendered inedible by being flipped on to the floor, or more annoyingly when they sort of flip over then catch the edge of the pan and then scrunch up in a wrinkled heap. Then you try and unwrinkle them, and they gets holes in. Anyway, most of them (and there were lots) were delicious. We had them with sugar and squirty cream. He went to bed happier than when he got in from school. Things like tonight make a difficult time a little easier. And here's one we made earlier. 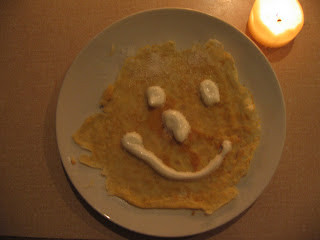 Your son sounds like a top guy. My pancake attempts were pretty embarrassing - not flat, spherical or in any way cooked - but to be fair we didn't have any milk and had to use buckwheat so I can't take full responsibility. It sounds like you're getting through the move ok. I'm offering my full totally insufficient electronic emotional support if that helps.

Thanks. This blogging lark is really introducing me to some lovely people.

This is a late post, as I have just discovered you - so just to say .... my 'bump' now 28, was 11 when her parents split. We are all happier 'better' people for it. It was very hard, for at least a year (ok, about five years !), so all best wishes to you and yours for whatever your futures bring to you.

Thanks Sally. I know it's going to be hard, but I believe what you already know - that we will be better for it in the long run. I will share more of my feelings in due course.